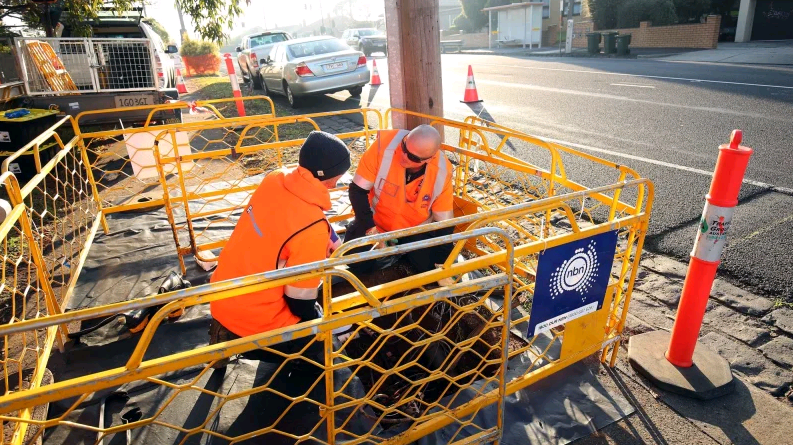 NBNCo will slash wholesale enterprise broadband prices and invest $700 million over the next three years, as it ramps up its bid to challenge Telstra as the dominant wholesale business broadband provider.
Under the plan, NBN Co will build fibre optic cable to a business premises free of charge and then provide its "enterprise ethernet" plan.

The move means businesses in Australia's regional high streets and business parks previously only served by Telstra's network will have another option. The result, say telco retail service providers, should be lower prices.

Many of these businesses are currently on residential plans, which are far cheaper than NBN's premium enterprise ethernet. That would mean most businesses would still have to upgrade their internet plan to take advantage of the new prices. Now it might be three times the price rather than six times the price to do so.

NBN Co accepted many businesses would not need the premium plans. It said the enterprise ethernet plans were best suited for sectors with high data needs, such as professional and technical services, healthcare, financial services, education and training, administrative services, and wholesale trade.

All this must be done through a retailer, meaning NBN Co will need the co-operation of providers including Telstra, Optus and TPG. Many retailers of all sizes, from Optus down, welcomed the move because it would temper the incumbent's immense market power.

"This is a positive initiative from the government that targets investment to areas of the market that are less well-served by competition," Optus head of regulatory and public affairs Paul Sheridan said.

Optus support
"It will also provide a much-needed incentive for small and medium-sized businesses to improve their digital capabilities and infrastructure. Optus looks forward to partnering with NBN Co to make this happen."

Business telco provider Macquarie Telecom, which does not own a fibre network, welcomed the announcement, calling it a "complete turnaround from the detrimental journey tier-one telcos had us on before the NBN was introduced and executed".

After spending $51 billion on a second-rate network, and a decade criticising Labor, it turns out fibre was better all along.
— Michelle Rowland, Labor communications spokeswoman

"Crucially, the availability of point-to-point fibre-on-demand to 85 regional zones will bring greater competition to regional Australia and be the final nail in the coffin for tier ones underserving and overcharging regional businesses that have not had choice of provider," group executive Luke Clifton said.

But some with large fibre networks of their own – including Telstra, TPG and Vocus – were less enthusiastic.

A Telstra spokesman said: "We look forward to seeing more detail. However, it is important this investment doesn’t lead to the inefficient duplication or overbuilding of existing infrastructure."

Vocus, previously a vociferous critic of NBN Co's push into the enterprise market, welcomed the move, provided it did not overbuild where there was already strong competition from fibre providers.

"With this commitment in place, today's announcement should be positive for competition – particularly in regional areas which do not enjoy the same levels of competitive investment in fibre infrastructure as major cities."

NBN Co said 1.4 million businesses around the country are now eligible to have fibre rolled out to their premises free of charge. Of those, 700,000 businesses in 240 "business fibre zones" are eligible for the cheapest prices, previously only available for businesses in major CBDs. For many businesses, that could mean a more than 50 per cent price cut.

The decision follows a move by Telstra earlier this year to slash the cost of its own on-net enterprise plans. It further ramps up competition in the enterprise market, which had been dominated by Telstra until recent years.

The $700 million investment appeared to confirm expectations that NBN Co would use some of the $6 billion it raised in private debt earlier this year to build its fibre network. More details on this move – including a potential upgrade of the residential network – will be released in Wednesday's corporate plan.

NBN Co chief executive Stephen Rue said the plan would "help open up the market for all internet providers – both existing and new, small and large – driving competition so that businesses can thrive right across Australia".

The government backed the move. Communications Minister Paul Fletcher said: "During this global health crisis the NBN has proven itself to be a vital national asset. It has supported Australian businesses as they have innovated and adapted to digital operating models to overcome the challenges of the pandemic and enabled families and friends to keep in touch virtually.

“The Morrison government understands the importance of continued investment into Australian businesses and digital connectivity. That’s why we are making affordable ultra-fast broadband available to more businesses Australia wide.”

Federal Labor took the announcement as an opportunity to criticise the government's "multi-technology mix", which replaced the Rudd government's original all-fibre residential network with one that used a mix of fibre, copper and hybrid fibre coaxial (HFC) technology.

"After spending $51 billion on a second-rate network, and a decade criticising Labor, it turns out fibre was better all along," opposition communications spokeswoman Michelle Rowland said.

"Today confirms the Liberals don't have a clue when it comes to technology or economics. Their only motivation is the politics of the moment and Australians have lost out."